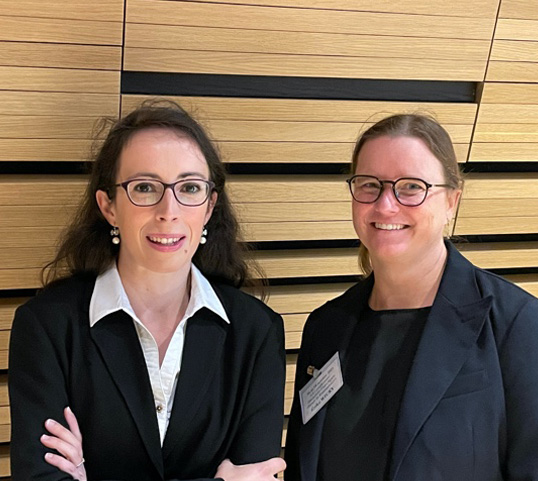 On October 14 and 15, 2021, the auditorium of the Château de Versailles hosted a symposium on the place of the perfumer and its evolution since the Renaissance

During two full days, historians, art historians, literary scholars, philosophers, perfumers and actors of the contemporary world of perfumery intervened to address the history of the figure of the perfumer, analyzing how it appeared from the Renaissance in Italy and was built from the 17th century in France and England.

Today, Alice Camus and Erika Wicky, the two organizers of this first international symposium, answer questions from the Per Fum Endowment Fund, which has supported the project since its inception.

– In your opinion, what should we learn from the Symposium?

First of all, this symposium has highlighted the relevance of conducting investigations in this still unexplored field of research. In particular, it allowed us to set important milestones in the history of the perfumer, to discover singular figures of perfumers, to highlight the plurality of practices and representations that have been associated with it. The testimonies of current perfumers have also brought a new look on the history of perfume creation. It also allowed us to raise questions from which we will be able to pursue our work, such as amateur perfumers, the style of perfumers, the role of raw materials in the creation or the place of women in the history of perfumery.

It also allowed us to highlight the slow and progressive emergence of the figure of the perfumer. Appearing during the Renaissance, this figure consolidates under the Ancien Régime, to blossom and evolve considerably in the following centuries. Today, the figure of the perfumer is clearly identified in the imagination of contemporaries. This is the result of several centuries of evolution.

– Did you feel that an event like this was important to hold in France?

Another thing to remember about this Symposium is that, since the Renaissance, there were perfumers all over Europe who used raw materials from all over the world. Moreover, the invited researchers came from several different countries. The history of the perfumer is international. However, the importance of the French tradition of perfumery today fully justifies that this Symposium was organized in Versailles. It clearly showed that it is in France that this figure appeared with so much independence and strength, under the Ancien Régime. At the same time, in Europe, perfumers remained associated with other crafts or were subject to certain influences that did not allow them to flourish as much as in France. It is since this time that French perfumers have also established their pre-eminence on the international market.

This fully justified the holding of such an event in France. Moreover, the city of Versailles, which was the residence of the French court during the century in which French perfumery was built, played a preponderant role in providing the main clientele of these craftsmen.

– Why did you choose historians to speak on such a subject? Why this choice of speakers, which leaves less room for perfumers?

First of all, because we are historians and we know that we can only really understand things if we consider them in their historical depth. The multiple evolutions of the figure of the perfumer put into perspective the way we consider this profession today. This is why we have privileged the historical approach while maintaining interdisciplinarity at the heart of the exchanges: the history of science, art, literature, etc. were also discussed. We wanted to involve researchers from various disciplines and not only historians.

To understand the figure of the perfumer from the Renaissance to the present day, involving researchers or perfumers are two different and complementary approaches. However, as they do not generally express themselves in the same networks, it seemed essential to us to bring them together to allow them to dialogue in the framework of a scientific event. Far from taking the place of current perfumers, the historians who presented their research on perfumers of the past valued the tradition to which they belong and opened a dialogue through history.

It was innovative to propose this dialogue between researchers and perfumers in the framework of a scientific symposium.

– What do you think should be the follow-up to such a Symposium? What will remain of what was said?

Like most symposiums, “The Perfumer : evolution of a figure since the Renaissance”, will result in a collective work that we are already working on. It will regroup the communications of the speakers which will have been enriched thanks to the exchanges to which the Symposium gave rise. This book will be able to nourish research on the history of perfumers and perfumery, olfaction, perfume plants, global trade or even corporations, but it will also be able to satisfy the curiosity of any person interested in perfumers. Finally, it will allow perfumers to situate their practice in a centuries-old history.

This Symposium, centered not on perfume, but on perfumers, is a first milestone in the vast work of analysis and reflection that can be conducted on this subject. Building the reflection around the individuals, much more than the products, was also innovative. From this first Symposium, other avenues of research can and must be opened up on this subject that is still too little explored.

The Osmothèque, which also spoke at the Symposium, quickly informed us of its progress on the modernization of its database.

Since November 1st, the Osmotheque is equipped with a new tool for managing its perfume database. A new software dedicated to the management of collections allowing the teams to manage with greater ease and security all the perfumes and raw materials, as well as a certain number of elements (objects, documents, media…) gathered in the collections of the conservatory since its creation 30 years ago.

Initially reserved for internal use, the new tool will eventually allow the Osmothèque database to be open to the general public as well as to other databases in order to automatically exchange information. This possibility of “harvesting” will allow the Conservatoire to develop its interactions with other databases, to dialogue with researchers and to position itself even more as a recognized scientific authority in the world of perfume.

This new database opens the way to a more secure and durable management of the current collection of perfumes, and to its enrichment to other segments.

Eventually, here are some of the functionalities that will be implemented: acquisition management, documentary enrichment, localization, restoration and preventive conservation, but also condition reports, loans and borrowings, collaborative work or multilingualism, etc…

If you wish to support the projects of the Per Fumum Endowment Fund, please send us a tax-deductible donation. More information on https://www.fondsperfumum.org/faire-un-don/