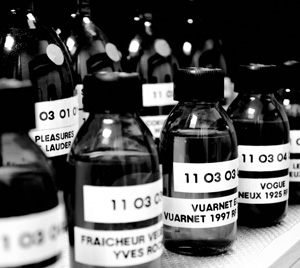 The Osmothèque, a unique place that preserves the olfactory heritage of perfumery, is modernizing!

The Osmothèque (from the Greek “osmè” = smell and “thèkè” = storage), is the first and only perfume conservatory in the world. It was inaugurated in 1990 with the aim of preserving perfumes from the wear and tear of time, from loss and from oblivion. As such, it represents the olfactory memory of perfumery. The collections of the Osmothèque archive nearly 5,000 perfumes, including 800 that have disappeared, as well as a large selection of raw materials and rare bases. The management of this growing collection justifies the implementation of a new, more efficient, reliable and secure computer tool. A tool that allows the technical management of the collections (stocks, different formulations and versions…) but also a valorization of them, based on a standardized indexing, easy intuitive and controlled, to be eventually consulted by different audiences.

The motivation is therefore strong since this new computer interface is necessary to lay the foundations for the new organization of the Osmothèque Cellar, at the center of the institution’s future deployments.

How and by whom are you being supported on this project?
To carry out this project, we surrounded ourselves with an independent expert team in museum-type collection management, and archive management to select and deploy the tool according to the specific needs of the Osmothèque’s perfume collection.

The first major step was to ” bring together ” the physical collection present in the cellar with the existing computer database. So we first conducted an inventory and an audit to verify the information about each perfume present in the cellar; which was already a lot of work.

Then, we cleaned up and standardized the initial computer files in order to rationalize all the information accumulated during the 30 years of development of this collection.

Today, we are in the process of finalizing the last step by creating a set of specifications to facilitate the choice of the most appropriate final tool.

With this new tool, the management of the Osmothèque’s perfume collection will gain on several aspects: more ergonomic, more exhaustive and allowing, thanks to clean and standardized descriptive fields, to make the different segments of the Osmothèque’s collection communicate with each other (books / internal archives / bottles / advertisements…). The database will also be more secure, in its accesses and by its methods of safeguarding.

This change of repository is also the sign of an achievement: the collection started 30 years ago with a first perfume, then a dozen, and almost 5000 to date, illustrates the tremendous development of the Osmothèque, which has been the precursor of the preservation of this evanescent and fragile heritage that is perfume.

Francis Kurkdjian is familiar with the Osmothèque, which is housed on the Isipca campus in Versailles, where he studied and had the opportunity to meet Jean Kerléo, who was behind the creation of the Osmothèque. Later, he was a partner in two olfactory conferences that we regularly organize to introduce the collections of the Conservatory. He also actively participated in the “Journées du Patrimoine”, during which the Conservatory opens its doors to the general public. Aware that the Perfumery’s heritage must be supported, it is quite natural that he contributed to our ambitious project.