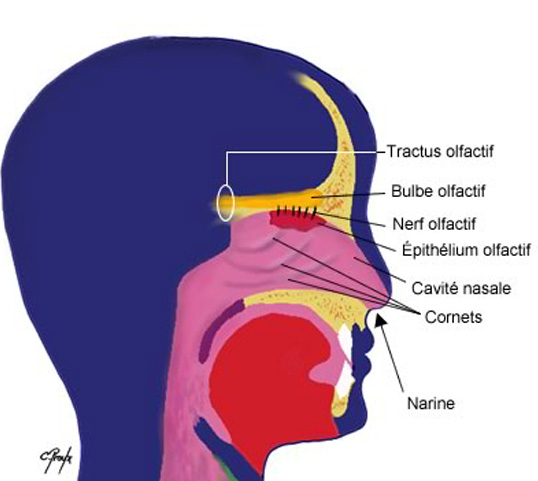 Thanks to our partnership with the Pasteur Institute in Paris, we were able to learn a lot about olfaction and how our brain is connected to our olfactory organ, the visible part of which is the nose.

The sense of smell, the least studied by scientists, is just as sophisticated and important as our other senses; however, what is not well known is that it evolves with age and can affect emotions, behavior, memory and thought. Socially too, the sense of smell remains little considered. Thus, nowadays, unlike the loss of sight or hearing, the loss of smell is still not considered a handicap. However, the loss of the sense of smell following an accident or an infection is often accompanied by episodes of depression and could even lead to social isolation. In addition, the appearance of olfactory disorders without obvious cause is proposed in medicine as an early symptom in many neurodegenerative diseases.

But how does the sense of smell work exactly? The microscopic molecules released by what surrounds us stimulate olfactory receptors located on the surface of specialized sensory cells called olfactory sensory neurons. These neurons are found in the olfactory epithelium at the bottom of the nasal cavity (inside the nose). There are several hundred different olfactory receptors, each capable of detecting different molecules. These neurons are directly connected to the brain, where they send nerve information to a small structure called the olfactory bulb via the olfactory nerve. Each olfactory neuron expresses thousands of copies of a single “smell receptor”. In addition, all olfactory neurons expressing the same receptor send their information to the same place in the olfactory bulb. Any molecule can stimulate a combination of receptors, creating a unique representation in the brain. These representations are registered by the brain as a particular smell. After detecting molecules through their receptors, the neurons send a message to the brain, which identifies the smell. This information is then relayed to other areas of the brain (memory, emotion, satiety…).

In addition, it is important to know that odors can reach the olfactory sensory neurons through two distinct pathways: the nostrils (external pathway) and a canal connecting the palate to the nose (internal pathway).

Combined with the gustatory system (i.e. taste), it allows us to appreciate all the complexity of the flavors of foods brought to the mouth. The senses of smell and taste are therefore closely linked, since the olfactory apparatus and the gustatory apparatus work together.

Chewing food releases aromas, which then reach the olfactory sensory neurons via this channel. So when the nose is blocked, by a cold for example, the odors cannot reach the sensory cells that are stimulated by the odors. This is why we cannot appreciate foods, tastes and flavors in the same way as when we are well.
You can support scientific research related to perfume and the sense of smell, which is crucial for the future of perfumery, by making a donation to the Per Fumum Endowment Fund. Find all the answers to your questions on the website www.perfumum.org or contact us on jesuisdonateur@perfumum.org.